Carrie Fisher and the Hidden Dangers of Sleep Apnea 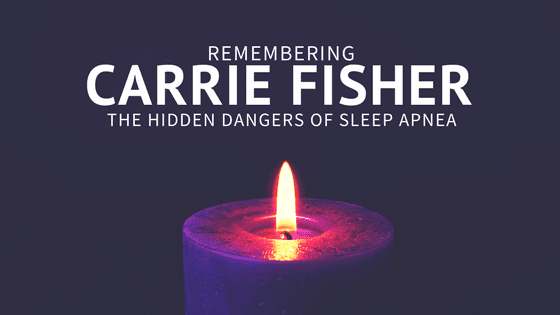 When Carrie Fisher passed away last year, her death left a lot of people shocked and more than a little devastated; she was well loved for her role as the fierce and capable Princess Leia — and later, General Leia — in the Star Wars franchise and, as an outspoken and honest advocate for mental health and addiction recovery. Two weeks ago, her fans and family finally got some answers as to what could have claimed her life at such a young age. Among the contributing factors was sleep apnea, a term most people may never have even heard prior to the release of her autopsy report on June 16.

Here’s what you need to know about the sleep disorder and how it can affect us all in truly devastating ways.

There are two types of sleep apnea

The term sleep apnea comes from the Greek “without breath,” so it is literally, “sleep without breath.” Essentially, the body is unable to take in oxygen for one reason or another during a time when we’re most vulnerable — that is, asleep.

Patients are more likely to suffer from Obstructive Sleep Apnea, or OSA. This particular kind of sleep apnea is characterized by the collapse of tissue around the airway, effectively blocking the trachea and causing apnea events during sleep. Patients with this kind of sleep apnea will sometimes sputter, cough, or choke during these moments as the body attempts to take in oxygen again and snore in the moments leading up to them.

Another, more insidious type of sleep apnea is Central Sleep Apnea, where the brain fails to send the proper “messages” to breathing muscles. Where the body attempts to breathe again in OSA as a matter of reflex, the same attempt is not made during a CSA event. This type can be harder to detect because without the airway collapse of OSA, the telltale sounds of interrupted breathing are not always present.

Some patients will suffer from a combination of both types of sleep apnea, or Mixed Sleep Apnea (MSA).

Over 22 million Americans will live with some form of sleep apnea, with the majority of those cases being OSA. This accounts for an estimated 4% of men and 2% of women. Most worrying of all, however, is that a majority of sleep apnea cases will go undiagnosed, so many patients will have apnea events consistent with the chronic disorder and never know or never seek treatment for their symptoms.

Anyone can suffer from sleep apnea

If you are familiar with the common sleep disorder, you may have still been surprised. We tend to think of a particular patient when we imagine a sleep apnea sufferer: they are majority male, and tend to be overweight and middle-aged, so we largely imagine the disorder to be one that only affects older males, when nothing could be further from the truth.

It’s true that there’s a particular demographic that’s more likely to receive a sleep apnea diagnosis, but that doesn’t mean that it can’t and doesn’t impact children, women, and physically fit men as well.

Sleep apnea is serious and can be dangerous

It can’t be stressed enough that sleep apnea, whether it is caused by airway obstruction or mixed muscle signals, is serious and requires treatment. This is a disorder that literally means a patient will not breathe during the night. Consider that in tandem with how few people seek out or even know to seek out effective treatments like Continuous Positive Airway Pressure (CPAP).

Years and years of this can lead to dangerous fatigue that contributes to physical accidents, to say nothing of the damage it can cause the body, including serious cardiovascular risks that can and do contribute to death, as they did in Ms. Fisher’s tragic case.

There is help available for sleep apnea

If you suffer from some of the common risk factors for any type of sleep apnea, including diabetes, alcohol or tobacco use, and obesity, it’s worth it to invest in your health with a polysomnographic test — or sleep test — especially if you have symptoms of sleep apnea, which can include any of the following:

But whether or not you fall into a neat little diagnostic box, if you have unexplained symptoms like the ones above, you might be at risk and you need to talk to a sleep doctor. It can mean the difference between life and death.